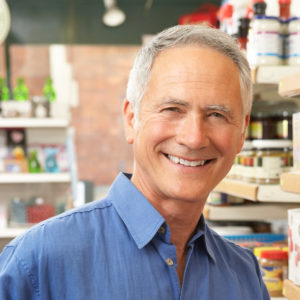 For years, Barry followed a healthy lifestyle. He exercised several times a week, watched what he ate and didn’t smoke. So, when he discovered blood in his urine one day after a long bike ride, Barry tried not to think too much of it. Although it happened again a few months later, it wasn’t until he saw his doctor about a separate medical issue that he decided to mention it.

His treating physician immediately ordered an ultrasound of Barry’s pelvic area, and also had him provide blood and urine samples. When all the test results came in four days later, Barry’s doctor told him he had bladder cancer.

“It hit me like a ton of bricks,” recalled Barry. “Ninety per cent of people who get bladder cancer are smokers, and I’ve never smoked a day in my life. I’m in the 10 per cent crowd.”

Barry was referred to a urologist who performed a cystoscopy, and after examining the inside of Barry’s bladder with the tiny camera, the specialist told Barry that his tumour was too big to even take a biopsy. Barry scheduled surgery to remove it, though he was warned he might lose his bladder due to the tumour’s size.

Meanwhile, Barry decided to contact Best Doctors for a second opinion. Barry was looking for reassurance about his diagnosis and treatment plan. “It was important for me to get a second opinion and know I was getting the best treatment possible,” Barry said. “When you have a second set of eyes looking at something, that second opinion puts your head in a good place.”

Barry’s test results were sent to an expert urologist in Massachusetts for review. In the Best Doctors report, the expert confirmed Barry’s diagnosis of bladder cancer and said he agreed with the proposed treatment plan. “That put me at ease,” said Barry. He also spoke highly of his Member Advocate. “She was a very reassuring person,” he said. “It wasn’t only good getting that second opinion. It was good having somebody in my corner.” Barry underwent surgery, and during the operation the surgeon discovered the tumour wasn’t embedded in his bladder and was able to remove almost 100 per cent of it.

Three months later Barry went for follow-up testing and learned he had no signs of cancer. He will continue to be monitored regularly to ensure his cancer doesn’t return.